Bears successes on third down proves too much for Bengals defense

The Cincinnati Bengals defense started strong but Chicago's third down conversions eventually became too much for the defense to maintain.

Share All sharing options for: Bears successes on third down proves too much for Bengals defense

As the game initially unfolded, the Cincinnati Bengals defense played well on third down preventing the Bears from converting six of their first eight third down opportunities. Whether it was a dropped Alshon Jeffery pass or a concession throw to Matt Forte on third and long, Cincinnati's defense was maintaining their image. It led to Chicago generating only 97 yards on offense in the first half, forced to punt on five of the first six possessions.

For example, on a third-and-two from the Bengals 47-yard line James Harrison sacrificed his stat sheet to take out two blockers which forced Forte to bounce outside directly in Hall's line of sight for a two-yard loss. Or Forte's drop with 7:13 remaining in the second quarter, with James Harrison and Vontaze Burfict stomping on approach for an immediate tackle -- a reception wouldn't have gained a first down anyway.

But there were defensive breakdowns on third down that led to Cincinnati's eventual loss; and those were more apparent in the second half, but not exclusively.

The Bears have third and 17 with over 11 minutes remaining in the first quarter. Chicago calls four-wide with the Bengals in nickel and Taylor Mays joining Vontaze Burfict at linebacker.

Brandon Marshall, as the inside receiver on the right, turned inside after ten yards. Burfict, at the line of scrimmage in the A-Gap, sprints back to cover Marshall's inside route. Unfortunately Burfict had his backed turned when Jay Cutler targeted Marshall's crossing pattern, who easily reached out with his arms for the 18-yard reception and first down.

Chicago's possession ended with an eventual touchdown and 7-0 lead.

With 1:14 remaining in the first quarter, the Bears have third and nine from their own 21-yard line. Adam Jones is covering Brandon Marshall wide to the left. The coverage is tight.

Throughout the first five yards, Jones kept his hands on Marshall to stall the timing as the route developed. Jay Cutler was patient while Vontaze Burfict maintained inside position -- however, Forte was in the neighborhood, redirecting Burfict's attention. 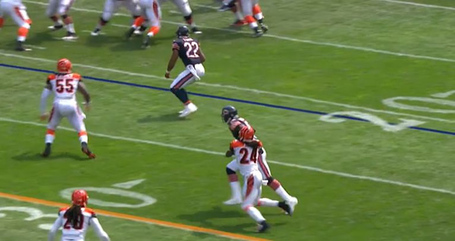 Marshall secured inside position and broke free from Jones on the crossing route as Cutler led the receiver over the middle. 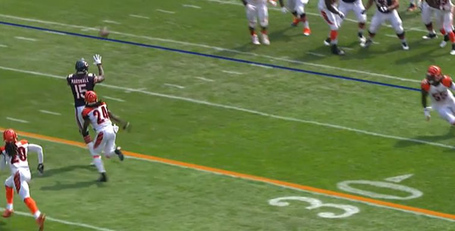 Too easy. The 13-yard reception led to a first down.

But one of the more frustration conversions with 6:30 remaining in the third quarter was the type of momentum-generating play that wins games. From the Bears 35-yard line, Jay Cutler scanned the field but his initial reads were covered. The pass rush forced Cutler to scramble out of the pocket. As he's approaching the first down marker, Adam Jones, maintaining the zone nearest to Martellus Bennett, made the decision to attack Cutler rather than staying in his region.

Cutler lobbed the football over Jones and Bennett gained 30 yards and the first down. Chicago scored a touchdown five plays later to reduce Cincinnati's lead 21-17.

Now we've reached the fourth quarter. Cincinnati is maintaining their four-point advantage but the momentum is clearly being carried by the Bears. Despite Vontaze Burfict's fourth quarter interception, Mohamed Sanu coughed up the football at the Bears 19-yard line, where the Bengals had ideal field position for points. None were scored. Eventually Chicago has third and three from the Bears 26-yard line with 11:22 remaining in the game.

Cutler takes the snap with far too much comfort in the pocket. 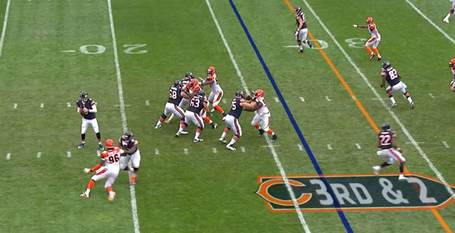 Terence Newman makes contact off the line of scrimmage, but Brandon Marshall's strength and speed is too much. Marshall escaped and Cutler led his receiver down the right sidelines for a 38-yard gain.

Later during the possession, the Bengals would stuff Matt Forte for a one-yard gain on third and two. Unfortunately, Chicago successfully converted the ensuing fourth and one with a Forte eight-yard gain. The Bengals were being eased into their coffin when Chicago scored the game-winning touchdown one play later, beating the Bengals 24-21.

There are countless reasons why the Bengals lost on Sunday. Third down conversions were part of that problem. It wasn't so much how many third downs that Chicago actually converted; rather when they happened and how easy it was for Chicago to convert them -- especially in the second half.