Bengals Vontaze Burfict fined $7,875 for faskmask against the Bills

Share All sharing options for: Bengals Vontaze Burfict fined $7,875 for faskmask against the Bills

Bengals linebacker was flagged for three penalties that drew 15-yard infractions, two of them personal fouls for a late hit and a helmet-to-helmet contact. According to Joe Reedy with the Cincinnati Enquirer, Burfict will not be fined for either of those hits.

However, his first quarter facemask on Fred Jackson cost him $7,875. Here's the play.

The other penalties were far more suspicious. The first happened with over ten minutes remaining in the first quarter when Burfict landed on a scrambling Thad Lewis, who slid to avoid the contact after a four-yard gain.

The officials called unnecessary roughness, moving Buffalo from the Bengals 20-yard line to the eight. Generally speaking, officials usually don't flag this if the defender was already in the act of making a tackle prior to the quarterback's decision to slide. While Wallace Gilberry was, Burfict wasn't. 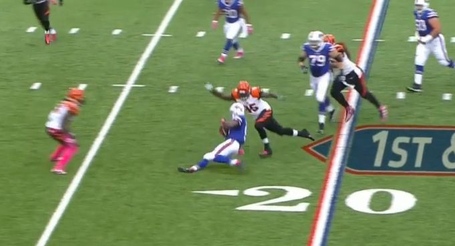 "I’m pretty sure (the NFL) is going to review it, but I didn’t think it was a flag," said Burfict after the game recounting all three flags. "The quarterback dove, I had left my feet already and he dove at my legs. They said I led with my helmet, the other was a facemask, my facemask had been pulled. I just reached my arm out and got his facemask. The helmet to helmet one I thought I had the ball in my hands."