With the upcoming game on Sunday, I thought I would enlighten you with a little smack talk about the Jets

Share All sharing options for: 5 things to keep in mind for Jets Bengals this Sunday - Smack edition

The wounds from the Jets are still open from me. In 2009 I traveled to the old Meadowlands to see the last game in the old stadium. This happened to be week 17 when the Bengals faced the Jets. The Jets were in a win and your in scenario for the playoffs and the Bengals had no intention of stopping them.

The final score was 37 - 0. Carson Palmer finished the day (1 half) with 11 yds passing. It set up back to back games for the two teams because they would face each other in the wild card round of the playoffs in Cincinnati. Again, the Bengals failed to deliver and the Jets were responsible for ending the Bengals season.

So being bitter and all, here are some things to think about when watching the Jets take on the Bengals on Sunday. 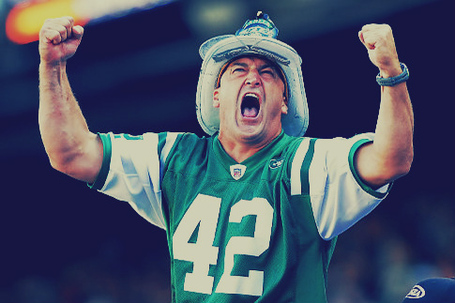 You know him. He is the obnoxious fan who led the J-E-T-S chant at Jets home games. He even made the trip to Cincinnati for the playoff game. What does it say about a team when your biggest fan gives up his season tickets after an embarrassing loss to division rival New England? Sure, he says it is for other reasons, but Ed quit on a team that quit on itself.

Is it bad when your most famous player gets drunk and embarrasses himself like any of the other fans. Below Joe gives a perfect example of even when you think something, you probably shouldn't say it out loud.

Almost no one screams louder that the Patriots are a bunch of cheaters. But lets not forget the way the jets used a strength coach to trip a player on a kick coverage attempt. It was gutless and shameful. I am glad the Bengals are above such immature behavior.

Sure, he is a loud mouth, obnoxious coach that makes fun of himself. He is also a bit of a "foot" guy. Not that there is anything wrong with it, but Rex and his lady enjoy themselves a little bit of a fetish of the foot variety.

I don't know why it bugs me so much. The New York Jets are a team that plays in New Jersey. Is it that the NFL thinks the market pull is greater with a NY label attached to the team or is it just that New Jersey is such a suck hole that no one really wants to claim it?

So keep these things in mind Sunday as our Geno plants their Geno to the turf several dozen times.