Curious if you'll be in a region that carries the Bengals on television? We have your answer.

Share All sharing options for: Bengals vs. Jets: TV Map

One would think that the Bengals and Jets, one of the few AFC matches this weekend featuring two teams with a winning record, would get more attention. However, CBS is carrying five games this Sunday and only a double-header -- which means less exposure for everyone.

When Cincinnati kicks off on Sunday, significant portions of Ohio and Kentucky will receive the game, as well as New York, and a couple of rain drops in Georgia, Florida, and the extreme southern tip of Texas. 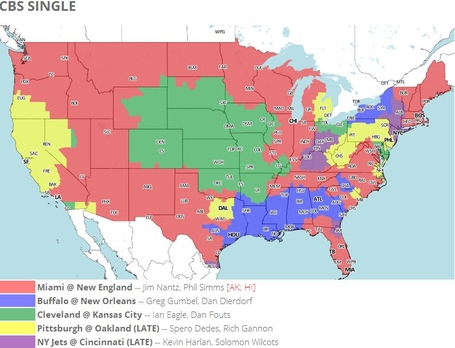 Fox has the double-header but due to NFL rules, those of us living in Cincinnati won't have a later afternoon game (on Fox) while the Bengals are playing. This is completely useless information because it never even occurred to you to watch something other than the Bengals. However, Cincinnati will get the early Fox games between the Detroit Lions and Dallas Cowboys.