We dust off the Chronicle to talk about the team's impressive depth, especially in the secondary. We also chat about Leon Hall's "amazing recovery", Oklahoma Drills probably seeing its final days and others.

Several weeks ago, CBSSports.com NFL writer Pat Kirwan broke down the depth chart for teams, by applying a series of questions to each position. Now that training camp is kicking into second gear with non-existent Oklahoma drills (more on that later) and an assassin-like approach toward the team's first preseason game, we wanted to answer Kirwan's questionnaire to enhance the subject of depth -- mostly because we're sitting at the doctor's office and it seemed appropriate.

1. Does your team have a real swing offensive tackle, a guy that can play left or right tackle and has experience?

Andrew Whitworth is the ruling party on the offensive line, the king of kings with an oversized neck and a probable case for sleep apnea. When offensive linemen seek advice, they approach the throne and a humble Whitworth teaches. An offensive tackle, capable of playing guard on whim, Whitworth has a tone that captures the inner-pianist in Paul Alexander. Yet, through all of the prognostication and offseason guessing, it appears that Whitworth will return to his natural habitat at left tackle. However, in a way this question has been answered. As Whitworth recovers from a tweak during conditioning earlier this week, it's Marshall Newhouse who has stepped in and rotated at both tackle positions since his arrival. And against Wallace Gilberry, a backup defensive lineman with 14 quarterback sacks in the past two years, Newhouse has handled his own.

2. Does your team have a solid inside offensive lineman that can play guard or center?

Yes... especially if Russell Bodine, Cincinnati's fourth-round selection in the 2014 NFL draft wins the starting center job. And, you have Mike Pollak, who scored a PFF grade of +4.9, as a backup for all three interior positions. When Clint Boling has rested, Pollak usually works at left guard and Bodine takes first-team snaps at center. You can add Trevor Robinson to the discussion, if he revisits his '12 version. It's actually a little weird to consider all of this without mentioning Kyle Cook -- but alas, we move on.

3. Is there a quality second running back that can deliver a 100-yard rushing day if he had to start? 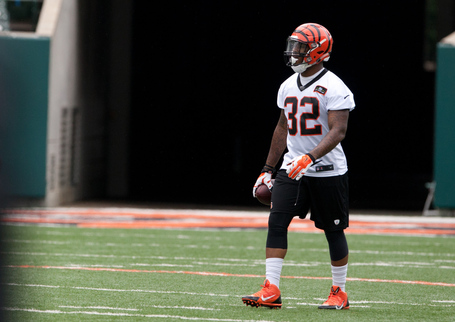 With Jeremy Hill, Giovani Bernard and BenJarvus Green-Ellis, the Bengals have three players capable of surpassing 100 yards rushing. However, one has to follow up that question with: Are the Bengals willing to swallow $2.5 million (including the $200,000 workout bonus) for keeping Green-Ellis? Most reports hint (and a good set of eyes at practice) that Green-Ellis is facing a fight for his job against Rex Burkhead, who was drafted in the sixth round and hasn't carried the football once. Talk about free-falling.

"It's not 2003. We know who 35, 40 of the players are going to be. Let's make sure those 35 to 40, we give them every opportunity to get to Baltimore in one piece."- Bengals head coach Marvin Lewis on canceling Oklahoma Drills

4. Is there a good second tight end on the roster?
5. Can the third wide receiver step up and start in the two-WR packages if a starter went down?

Jermaine Gresham, posting comparable numbers among the franchise's best tight ends, and Tyler Eifert, last year's first-round selection, offer a reasonable argument to increase the number of double-tight formations this year. Adding A.J. Green and Marvin Jones on the edges, with Giovani Bernard in the backfield, Cincinnati literally has an all-purpose formation thanks to their tight ends. If you want to debate the merits on whether Gresham is good or not, go for it. But he can ball when his head is right.

That said, should Cincinnati pull Gresham or Eifert when showing three-wide? An argument could be made for both. According to PFF grades, Eifert is the better blocker and Gresham has the surest hands. Lol, right? Back to PFF for a moment: Of the 63 passes targeting Gresham, three were dropped for a drop rate of 6.12. Eifert dropped five of 56 targets for a drop rate of 11.36. And judging who is the better blocker is an argument between the "lesser of two evils".

As for the fifth question... there's a hope that Cincinnati becomes less dependant on A.J. Green. In addition to running the football more (productively), the passing game was far more effective when Green wasn't the primary target last season. Dalton, when throwing to a receiver not named Green, completed 66.5 percent of his passes while generating 12 touchdowns and only four interceptions -- he was Kaepernick-money-worthy. On passes to Green, Dalton completed 57.3 percent of his passes, scoring 11 times but throwing 12 picks. Obviously it's not all Dalton's fault, nor all Green's. There were drops (11), forced throws and errant tosses. That said, because Green is Green, it opens avenues for other players for Dalton to check down to. If Green goes down, do the Bengals have someone to replace him? Hell no. Can they get by? Yes, they can. A roster with Jasper Collins gives us an unlimited number of possibilities.

6. Does your team have a designated pass-rush specialist who could play the early downs if need be?

There's Carlos Dunlap and enough question marks to make the Riddler feel a bit overwhelmed... at least for me. Everything can appear nice on paper but my concerns are:

7. Is there a third defensive tackle that not only plays in a rotation but could play the whole game if need be?

Cincinnati's evolution of defensive tackles goes like this: Is this person really, really big (and/or strong) with a lower center of gravity? Awesome. Otherwise, let's just throw a bunch of defensive ends in the three-hole and call it a day. The point: Many players on the defensive line, not assigned a specific spot (Dunlap at right defensive tackle, Geno Atkins at three-position or Peko at nose tackle) tend to move around a bit. We'll see more Devon Still and Brandon Thompson; the latter of whom showed great potential at nose.

8. Is there a quality nickel corner on the roster, since most teams are at least 50 percent sub defenses?
9. Is there a fourth corner for dime packages? 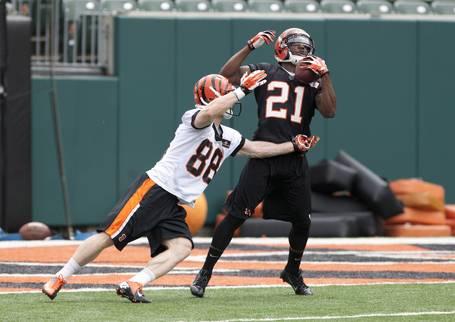 Hell, there's a quality cornerback at every stage on Cincinnati's depth chart. Leon Hall, Terence Newman and Adam Jones are your old dogs. The pups include rookie Darqueze Dennard and Dre Kirkpatrick -- first round picks in two of the past three years. If opposing offenses go three-wide, Hall will blanket the slot receiver like few can in the NFL.

10. Is there a third safety for big nickel defenses?

Save for Danieal Manning rehabilitating a broken fibula but participating during camp, everything appears to be cooperating on this front. I know, I know. Loki is a prick and can drop the proverbial injury bug at a moment's notice, disguised as muddy water in broken-ankle-land. With Manning, Reggie Nelson, George Iloka, Taylor Mays and, let's not forget third-rounder Shawn Williams, Cincinnati's secondary is arguably their greatest strength on defense in this post Michael Johnson (and post Geno Atkins ACL tear) era.

11. Is there a return specialist that can either handle both punt and kick returns or contribute as a real position player?

Brandon Tate is... (ducks from flying debris and moves on).

12. Does your team have a special-teams linebacker that leads the specials and can play inside linebacker in a pinch?

Does The Prototype answer count? World, meet Vincent Rey, who started three games for the injured Rey Maualuga at middle linebacker last season. During a two-game stretch against the Cleveland Browns and Baltimore Ravens (week 10 and 11), Rey posted 27 tackles, three quarterback sacks, an interception, and four passes defensed. Later, against the Minnesota Vikings, Rey only posted a single solitary tackle. Not happy with the lack of tackles on defense, Rey added a quarterback sack, a pick-six and a forced fumble.

If there were a Rodney Dangerfield of the Cincinnati Bengals (aka, not receiving any respect) well, that would probably go to Andy Dalton. But Rey would be a close second. 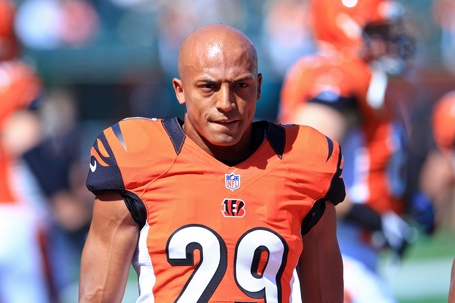 Perhaps it's the realization that I'm not a trained athlete, pushing my body to new extremes, that expresses words like "amazing" or "miraculous." The Achilles, described as the largest and strongest tendon in the human body, is capable of handling 10 times your body weight. Recovery from an Achilles tear for a young athlete can be six to nine months... and over a year for most of us (then again, reaching a state of recovery for most of us is the simple act of walking unassisted to the kitchen to pour our fifth bowl of Cheerios).

We add one cautionary tale from 2011... Hall tore his Achilles against the Steelers that year and made it back for training several months later. During the regular season opener (against the Ravens), Hall allowed a season-high 93 yards, 153.3 opposing quarterback rating and a 52-yard reception. Against the Browns in week two, opposing receivers caught five of seven passes -- however Hall deflected three passes. There were five games that opposing quarterbacks surpassed a quarterback rating of 100 or better against Hall, and three were between weeks 12-14.

It wasn't until week 15 that Hall reached absolute domination. His interception against the Philadelphia Eagles turned the tide that led to an eventual blowout. He would add a pick-six against the Steelers and Texans (wild card game) in two of the final three games, scoring more touchdowns (2) than Cincinnati's entire offense. 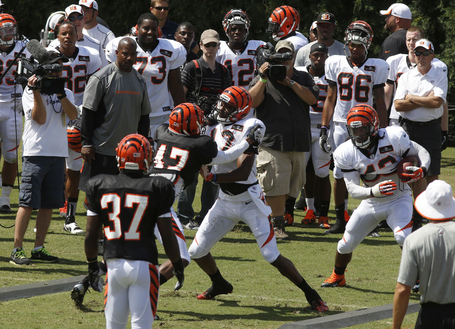 At some point before Sunday, the coaching staff devised the team's training camp schedule. Oh, Sunday. Let's say, 3:15 p.m., we'll run the Oklahoma drill, we imagine them saying while snacking on nutritious spinach and wheat thins. By the time Sunday afternoon rolled around, the Oklahoma drill was scrapped. Of the mundane training camp practices that are approaching, the day featuring popular Oklahoma drills is predictably the biggest draw.

When asked about it (and really not knowing the question that his response corresponded with), Bengals head coach Marvin Lewis said, "Fans don't know (the) practice (schedule), so there was no Oklahoma drill guarantee."

Once Lewis stopped being a dick defensive about the decision, he iterated a far more reasoned point.

"I'm in favor of total preparation for the players for the season," New England Patriots head coach Bill Belichick said last December. "And I think that's been changed significantly and, I would say, not necessarily for the better, when you look at the injury numbers."

Injuries are up fairly significantly this year -- especially lower-body injuries, as defensive players lower their targets to try to avoid the league's new focus on helmet-to-helmet hits. According to ESPN's John Clayton, NFL teams lost 1,276 player games to injury or suspension in 2012. After the CBA, that total went up to 1,403 in 2011 and 1,414 in 2012, and in 2013, it's already at 1,514.

Either way, we may have seen the end of Oklahoma drills.

NO RAY RICE... No Problem

League insiders announced last Thursday that Baltimore Ravens running back, Ray Rice will serve a two-game suspension related to events over the offseason when he struck his then-fiancee "unconscious in February while on a casino elevator in Atlantic City." The suspension will take place on week one and two, when the Baltimore Ravens play the Cincinnati Bengals and Pittsburgh Steelers respectively.

You're thinking... yes, no Rice. Rice has generated a 4.5 yard/rush average in 12 games, while accumulating nine touchdowns (eight rushing). Though he's only surpassed 100 yards rushing twice against the Bengals, he's usually had decent success.

Truth is, Part I: Whatever.

The things we've learned from this: