According to the person who does their power rankings, the Cincinnati Bengals have never ranked No. 1 at Sports Illustrated... until now.

Share All sharing options for: Bengals rank No. 1 in Sports Illustrated Power Rankings 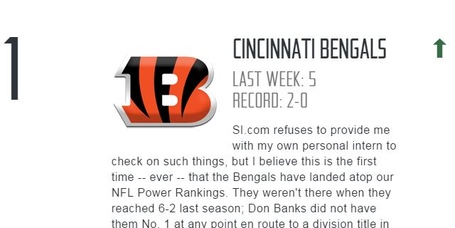 It's the first time that the Cincinnati Bengals have ever been ranked No. 1 on Sports Illustrated's modern version of their power rankings -- I'm honestly not going to verify it, even with my google-fu. Even during the Sam Wyche era, it's a little hard to believe (unless they didn't have power rankings).

The Power Rankings streak breaks here, after Cincinnati manhandled Atlanta with a suffocating defensive effort and an impressive ground attack. Doubt Andy Dalton if you must (and he does deserve some skepticism until he wins a playoff game). This team is for real.

At least according to them, the Begals are No. 1.

The Bengals ranked over the Denver Broncos and the surprising Carolina Panthers, who ranked third. Most publications ranked the Bengals second and third. Even our own "whodeyfans" ranked Cincinnati below the Broncos, who continue dominating games