A look at the notable defensive line prospects from this year's NFL draft class.

The Bengals need defensive line help for the first time in a few years. Not just help, but pass rushers. Losing Michael Johnson has left a big void at right defensive end (RDE) and Geno Atkins coming back from a knee injury may have created a need for an interior pass rusher.

The Bengals have the Defensive Ends to line up in their base defense, but when they employ their most common defensive personnel, the Nickel, they're left without a viable RDE. If you're looking at a position where the Bengals can find a starter in this draft, this is it.

But here's the catch: After their second-round pick, your best option is moving Margus Hunt or Carlos Dunlap. Both would be bad ideas, in my opinion. The cutoff line is after Boise State's Demarcus Lawrence, a player many have started mocking in the 28-40 range. This need may need to be addressed at pick 24 for Cincinnati.

Here are their options... 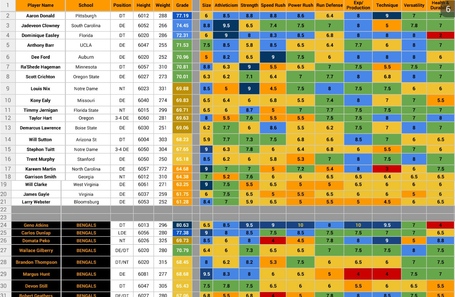 The most disruptive interior lineman since Suh/McCoy. Completely dominated at Senior Bowl, Size isn't a negative because it gives natural leverage. Takes some plays off, but was on the field for almost every snap. Donald is very athletic and strong to go with high-level hand use and technique. Instant impact player.

Doubled and even Triple-blocked this past year at SC. When singled, Clowney was disruptive almost every play. Total sacks were down, but he was in the backfield consistently and fought hard against the run. 3-Cone numbers are worrisome for a pass rusher. I didn't see effort concerns, but there are technique and vision issues. He's a very good player as he sits today, but can be a complete freak of a defender if he puts everything together.

Two knee injuries will wipe him off team's boards completely, but Easley is one of the most fun prospects to watch with his enthusiasm and unique ability. Very athletic, flexible and plays violently. Jumps off the screen on almost every snap.

Long, Athletic, Versatile, willing vs the Run, slowly developed as a pass rusher after being moved between DE and OLB. I think he'll be a better pro than college player. Would be SLB in base and RDE in Nickel for the Bengals. His size/speed combo is especially hard to find in this draft.

Size is the concern as most every legit pass rusher is over 6'3" -- Ford uses his shorter height as a natural leverage and bend advantage. Nobody turns the corner like Ford and when he gets a good jump, it's over. SLB in base, DE in Nickel for Bengals. Played primarily LDE at Auburn, but had a great game at RDE in the Senior Bowl.

Crichton's motor runs hot every play. He moved all over the Oregon State DL from DE to NT to 5-tech, 3-tech and even dropped into coverage. He needs some hand-placement work, but he's a 3-down contributing player. Would play LDE in base and slide inside in Nickel for the Bengals; much like Wallace Gilberry and Robert Feathers do.

Ealy doesn't show the athleticism on tape that he recorded at the Combine and Pro Day. He's a finesse player with average athleticism that needs to be moved inside in Nickel to contribute on passing downs. That's where he'll make his money.

The last of the good 4-3 DE pass rushers. Lawrence plays with more length than he measured and when he gets to line up wide and rush the QB, he can employ several moves and get to the QB in many ways. Burst, Balance and Bend are all here. Upside is apparent, but I wonder about the THREE instances where he was suspended for a game.

Looked like a prime time pass rusher after 2012, but he added bad weight in 2013 and saw most of his quickness fade. Sutton became a different player and ultimately started using his moves and hands to win. 2013 could be a blessing in disguise as his weight is back down, but now he's added better pass rush moves.

Good size/length but a below average athlete despite a great showing at the Combine. Murphy's best asset is his versatility. He did many of the things Cincinnati asked Michael Johnson to do. Most of Murphy's sack came when he out-hustled the OT or cleaned up a scrambling QB. He rarely beat college OTs despite highly productive numbers.

Another raw project with high upside due to length, power and athleticism. Martin looks like a Bengals DE but he might be more raw than Margus Hunt. His hand use is nonexistent and leverage is inconsistent. Martin often looks lost and is caught standing around and watching.

Another DE in the Bengals mold. Like Martin, Will Clarke needs a technique overhaul but the scary part is how much strength needs to be added to a player without much fire in his belly. This is a complete developmental pick. Clarke is very raw.

Played LDE exclusively but doesn't fit that mold of an NFL LDE. Didn't have the agility to bend the arc around the outside and didn't have the power to create pressure inside. Actually looked the most athletic when he dropped into Coverage.

Late round pick with size upside. Had some nice measurements at Pro Day and put himself on many radars. Didn't dominate D2. Needs technique overhaul.