The Cincinnati Bengals traded up in the fourth round to grab North Carolina offensive center Russell Bodine.

The Cincinnati Bengals, needing a center after releasing starter Kyle Cook earlier this year, swapped fourth-round picks with the Seattle Seahawks, along with sending Seattle their No. 199 pick (sixth-round). Bodine was the bench press king at the NFL Combine, going 42 reps at 225 pounds.

STRENGTHS Carries a load in his punch and plays with vinegar. Can seal and turn defenders in the run game to create small creases. Plays with a mean streak and likes to finish blocks. Is aggressive working up to the second level and efficient cutting linebackers. Rugged competitor. Stout anchor in pass protection. Versatile and has seen action at center and guard. Excellent weight-room strength -- bench-pressed 225 pounds 42 times to lead all participants at the combine.

WEAKNESSES Stiff-bodied. Plays short-armed and overextends. Average agility. Is late to switch off blocks. Relies too much on his upper-body strength. Mechanics deteriorate the farther he is asked to travel. Slow to adjust to counter moves. Produced the slowest 3-cone time (8.29 seconds) of any offensive lineman at the combine. 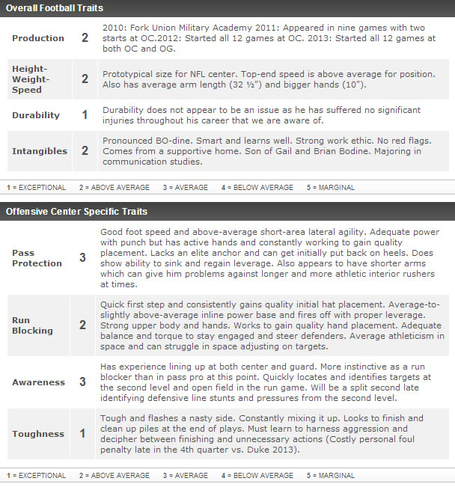