The Cincinnati Bengals have selected MSU cornerback Darqueze Dennard with the No. 24 pick of the 2014 NFL draft.

Share All sharing options for: 2014 NFL Draft: With The No. 24 Pick The Cincinnati Bengals Select Michigan State CB Darqueze Dennard

Cornerback isn't an entirely surprising pick -- it's been theorized since January. Leon Hall is coming off his second Achilles tear in three years, and he'll join Terence Newman and Adam Jones in the 30-club, with Newman turning 36 years old later this year. Dre Kirkpatrick remains an unknown but shows signs of being an elite performer.

After a stellar 2013 college football season, Dennard was named the Jim Thorpe Award winner as the nation's best defensive back. This, after starting all 14 games and recording 62 tackles, 10 pass deflections and four interceptions to go with 3.5 tackles for loss and two forced fumbles. Dennard also became the first Spartans cornerback to earn unanimous first-team All-America honors and was selected as the Big Ten's Defensive Back of the Year.

We wouldn't expect the Bengals to start Dennard immediately, but he's a tremendous insurance policy this year and will develop into a starter either later this year or next season with Newman entering the second season of a two-year deal.

Per the ESPN scouting report, which ranks Dennard as the top cornerback in the 2014 NFL draft and 12th overall: 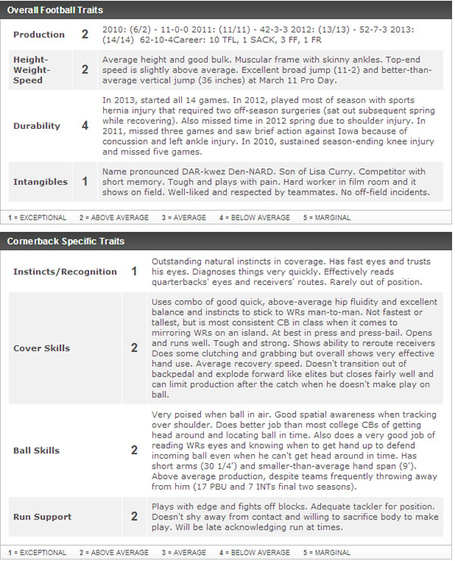