2014 NFL Draft: With The No. 88 Pick The Cincinnati Bengals Select West Virginia DE Will Clarke

The Cincinnati Bengals respond to losing Michael Johnson with 6-foot-6 defensive end out of West Virginia.

Share All sharing options for: 2014 NFL Draft: With The No. 88 Pick The Cincinnati Bengals Select West Virginia DE Will Clarke

The Cincinnati Bengals have answered Michael Johnson's departure by selecting West Virginia defensive end Will Clarke. Clarke, 6-foot-6 and 271 pounds, ran a 4.77 40-yard dash at the NFL Combine with respectable numbers in the vertical jump. During his senior season, Clarke posted six quarterback sacks and 17 tackles for loss, three passes defensed and one forced fumble. He's a long list of athletic freaks that the Bengals love at defensive end.

I really like the pick of Clarke to Bengals. This kid flashed big-time ability at times as a pass rusher. GRADE: B+ http://t.co/KPxAyHqyNs

That's a great Michael Johnson replacement. Another tall, long DE who knows how to swat passes at the line. 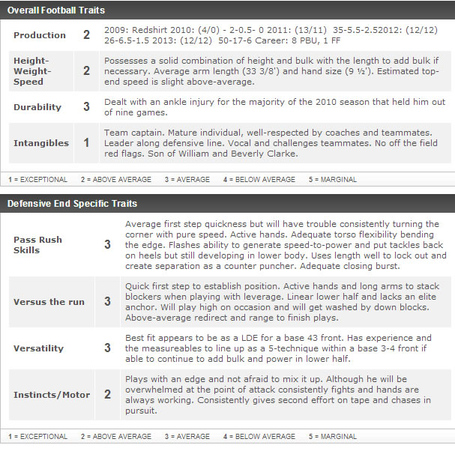 STRENGTHS Has a long, athletic, muscular frame. Very good movement skills for his size. Flashes the ability to penetrate or stack and shed. Gives effort in pursuit and ranges to make tackles. Solid personal and football character -- has leadership traits. Smart and coachable. Durable three-year starter.

WEAKNESSES Does not play to his size -- plays too tall and does not generate power through his core. Shrivels against double teams and is too easily uprooted. Needs to play with better pop and power in his hands. Linear, vanilla rusher -- does not have a variety of moves to defeat and accelerate off blocks.

BOTTOM LINE Looks the part with desirable length and musculature to warrant consideration as a developmental five-technique in a one-gapping 3-4 scheme or base end in a 4-3 front, though he will have to make significant strides with his technique and improve his run defense to be more than just a guy.