The Cincinnati Bengals will host the Green Bay Packers this weekend and the coverage map suggests a lot of potential viewers.

CBS has the double-header this weekend, but since the Bengals are hosting an NFC team, the game will be on FOX. Despite competing against six games on FOX, most of the nation (especially the upper Midwest and throughout most of the west cast) will see the Bengals host the Green Bay Packers. 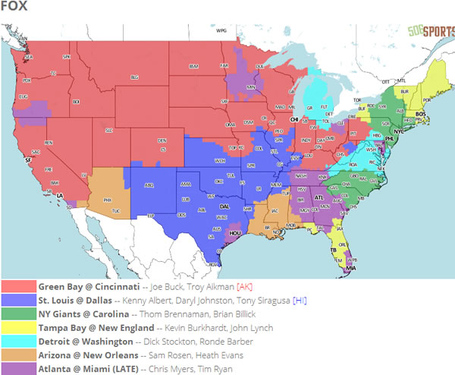 If you're in Cincinnati, along with the Bengals on Fox, there will be no early CBS game (due to NFL regulations) and the late afternoon game will feature the Indianapolis Colts visiting the San Francisco 49ers, along with the rest of the nation.

We should conclude the A-team of announcers next week when the Bengals head to Cleveland on Sept. 29. Jim Nantz and Phil Simms (the CBS A-Team) called Cincinnati's 24-21 loss to the Chicago Bears and of course it was Mike Tirico and Jon Gruden on ESPN's Monday Night Football.