I chat up the Packers and the Bengals matchup by trading questions with Jason Hirschhorn over at the SBN Packers site, Acme Packing Company.

Share All sharing options for: Bengals vs. Packers: Questions with Acme Packing Company

This week we trade questions with Jason over at AcmePackingCompany.com. You can follow him on Twitter at: @JBHirschhorn

I have heard rumors that Eddie Lacy may be cleared this week and also that James Starks is going to start. After watching last week, are Packer fans happy about the Starks start based on his production?

The Packers haven't ruled Eddie Lacy out, but I wouldn't expect to see him in uniform this weekend. The Packers have traditionally been one of the more conservative teams when it comes to medical decisions. Even if he is active, expect him to play a substantially smaller role than James Starks. As you hinted at, James Starks had a tremendous performance last week against Washington. It's not the first time he's unexpectedly run roughshod on an opponent, but he's not known for stringing together strong performances either. Certainly, Starks' performance excited Packers fans, but most aren't expecting him to repeat it against the Bengals.

Aaron Rodgers is on quite a streak with at least 3 touchdowns in his last 5 games. Is this a result of offensive planning or was this to counter what some believed was a poor running game.

I don't know if a team can actually plan to throw 3+ touchdowns on a weekly basis, but it's certainly nice when it happens regularly. As I'm sure you know the Packers' running game the last few seasons hasn't been particularly effective. However, the ground game was certainly strong against Washington, and Aaron Rodgers threw for 3 touchdowns before halftime. When your offense is as potent as Green Bay's, production through the air doesn't have to be at the expense of a ground game.

The Packers' defense is a little banged up with Casey Hayward, Jarrett Bush and Morgan Burnett all out or limited in practice. Is this a concern when you are facing a team with A.J. Green?

Absolutely. Jarrett Bush is a special teams player, but the other two are both prominent members of the starting secondary. Casey Hayward generally wouldn't cover A.J. Green as Hayward normally stays in the slot, but his absence forces the Packers to shift Tramon Williams inside and bring in Davon House to fill the void. Now, House won't always be on A.J. Green, but when it does happen it could get ugly.

I think that's a fairly safe assumption. Finley missed some practice last week with a toe injury, yet he didn't appear to have any limitations during the game. Unless he's endured a new injury, expect Finley to play.

What is the biggest single matchup you think the Bengals can exploit against the Packers on Sunday?

That would be Geno Atkins versus Evan Dietrich-Smith. Bengals fans don't need me to sing Atkins' praises to know what a monster he can be, but he could have a career day in this matchup. Since becoming the starting center, Dietrich-Smith has played just well enough not to be replaced. He struggles against stronger defensive lineman, and few possess a more powerful base than Atkins.

What is the biggest single matchup you think the Packers can exploit against the Bengals on Sunday?

The Packers' receivers/tight ends against the Bengals' back 7. There aren't many teams that have as many quality receiving options as Green Bay, and when the Packers play them together, it's extremely difficult to defend. Athletic tight end Jermichael Finley can sprint past the Bengals' slow linebackers, and Cincinnati doesn't have enough quality corners to stick with Randall Cobb, Jordy Nelson, and James Jones. If Rodgers gets enough time, the Packers will boat race the Bengals into submission.

The last time the Packers were in Paul Brown Stadium, their momentum was crushed when Bengals fan Greg Gall jumped onto the field and took the ball right from Brett Favre's hands. How many minutes have the Packers spent in practice preparing for this situation?

My sources inform me that the Packers have hired a fan interference coordinator to prepare for just such an emergency. I haven't received all the details, but he's a former FBI agent stationed in Pawnee, Indiana named Bert Macklin.

How upset are you at the Bengals for blowing a 4th quarter lead and allowing the Bears off the hook in week 1?

I can't be too upset considering I picked Chicago to win. However, several of my colleagues were not terribly pleased to find out the Bengals handed over a win to a division rival. Ultimately, the NFC North will come down to inter-divisional games, not the Bengals week 1 almost win.

If you had to nominate one Packer player to face a Bengal in a steel cage matchup, who would you nominate? 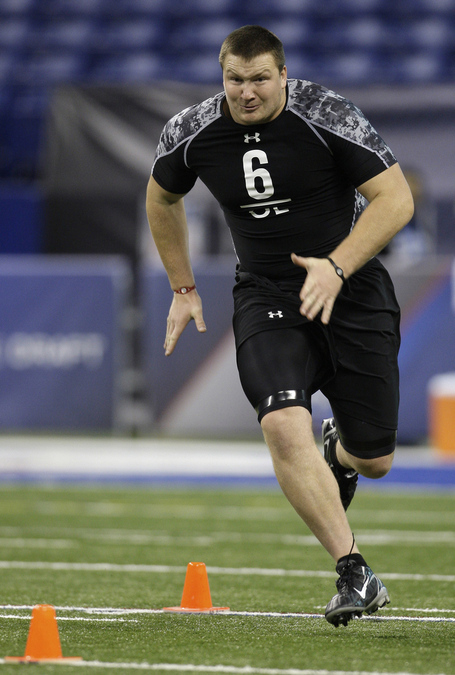 Bryan Bulaga. He's a former college teammate of James Vandenberg, and perhaps some of the Vandenberg's large animal hunting skills rubbed off on Bryan.