Share All sharing options for: Andy Dalton's growth leads him to Aaron Rodgers

Bengals quarterback Andy Dalton has his critics. Outside the virtual Cincinnati moat, people shrug their shoulders at Dalton, though most acknowledge his viability as a game manager. Even some fans wearing shades of orange, scratch their heads wondering why he hasn't already obliterated team records. A lot of it is unrealistic expectations from draft friendly enthusiasts who have opposing views on most players -- hall of fame potential, or bust. Wrapping everyone under that umbrella is undoubtedly unfair, but the realistic view of Dalton should feature an opinion with realistic perspectives.

"Dalton has been a cog in taking this team from the Palmer debacle to where it is now," commenter Whodey in da 722 writes. "He is solid mostly, good often, great rarely, and spectacular never. His game and arsenal have improved, but he still makes errant throws to wide open receivers far too often for my liking. Having said all this, when he is in rhythm,, and the running game is decent, he can burn a team."

"Obviously you have the Mannings, the Bradys and there are great quarterbacks but I think Rodgers brings an extra element to the game.-Bengals CB Leon Hall

Entering his third season, Dalton has amassed 20 wins as a starting quarterback, with two postseason berths. Obviously he's not doing this alone with one of the league's best defenses giving Cincinnati a major assist. But Dalton is the quarterback for today and will be here beyond tomorrow. Elite, no. But he's already generated five fourth quarter comebacks and seven game-winning drives. He was the quarterback that Cincinnati needed in 2011... and still needs today. But his performance against the Steelers rose presidential-like red flags.

"After a shaky performance against the Steelers many wonder if Dalton can lead the Bengals to a Super Bowl," one of my staff members, James Rapien opined. "No one knows the answer to that question, but if there is a week he needs to play well, it's this week against Aaron Rodgers and the Green Bay Packers. Many believe Rodgers is the best quarterback in the NFL and for good reason. The 2010 Super Bowl Most-Valuable Player set a franchise-record Sunday with 480 passing yards, completing 34 of his 42 passes last week against the Washington Redskins."

Notably Dalton struggled in the first half, missing open receivers (and tight ends) for a mediocre 15 of 30 passing. On the bright side, Dalton never turned the football over and Jay Gruden's questionable offensive philosophy turned a blind-eye to the duo of running backs sitting patiently in the backfield. Once the team featured more balance in the second half, Dalton went nine out of 13 for 115 yards passing including a near perfect 155.7 passer rating in the third quarter.

What can you expect though from a quarterback entering his third season. Many had projected Dalton's explosion to occur in his third year. But those were arbitrary expectations that were developed during those insanely boring moments in the offseason. Growth for a quarterback in the NFL is progressive, with the game slowing down and defensive philosophies finally being understood. It's also not uncommon for a developing quarterback to check out the best passers in the league. For Dalton, it's Green Bay Packers quarterback Aaron Rodgers. 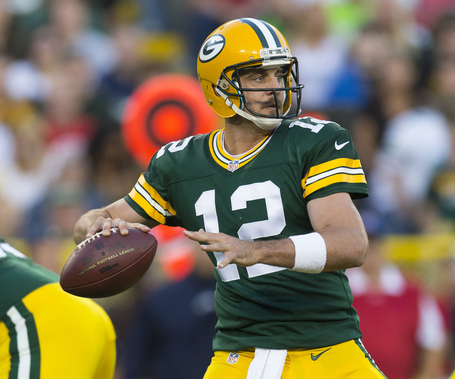 "He's one of the best in the game," said Dalton of Rodgers via FoxSports.com. "Just to see what's he doing. What are some of the checks he's making? What are some of the progressions he's going through? What route combinations does he like and do they use a lot? How's he making his plays? He does a really good job of getting outside the pocket, making plays when things aren't exactly how you want them. Getting outside – his receivers do a good job of working when the play breaks down. Just different things like that."

Ultimately Cincinnati's offense will come down to clock management and not those explosive plays that defines Green Bay's offense today. Balance, which we saw in the second half against the Pittsburgh Steelers, along with third down production will keep Green Bay off the field and eliminate the prospects of a shootout that may complicate things for Cincinnati's offense.

"I think there's going to be a big emphasis on third downs, picking up first downs, keeping the clock going, keeping the ball in our possession and when we get to the red zone, scoring touchdowns instead of field goals," said Dalton via FoxSportsOhio.com. "When you're playing an offense like this, you want to take advantage of every chance you get and get points as much as you can."