Bengals defensive tackle Geno Atkins off to a slow start

Defensive tackle Geno Atkins is one of the more talented three-technique tackles in the game today. So why is he off to a slow start (by his standards)?

Share All sharing options for: Bengals defensive tackle Geno Atkins off to a slow start

One of the prevailing questions being asked early this season is, what's going on with Geno Atkins? It's a question born out of expectations. If Atkins were any other defensive tackle in the NFL, he'd be having a good season by any standard. The numbers are down, but normal defensive tackles are usually assigned with lane congestion more than complete domination. However, this is Geno Atkins that we're talking about. One of the best defensive tackles in the game and perhaps one of the most critical components for a defense that's saturating with talent.

Through three games this season, Atkins has generated one tackle and one quarterback sack -- it just so happens that they're both the same play. According to Pro Football Focus grading scale, Atkins scored the second-worst defensive grade (Vontaze Burfict was the worst) and that's coming off an average 0.4 grade against the Steelers. Against the Packers, Atkins didn't put anything on the stat sheet, but was credited with a quarterback hurry.

Maybe there's a reason for that. During most of the game, the Packers used a lot of quick-passing schemes while running away from Atkins. Additionally, the Packers doubled-down on Atkins a lot, especially on runs targeting his side of the defensive line. But that shouldn't let Atkins off the hook.

On the Packers first play of the game, running back James Starks gains 13 yards, targeting the lane occupied by Atkins. However, the Packers showed pass on the delayed handoff and right guard T.J. Lang just guided Atkins up-field rush around the ball carrier. A majority of Green Bay's passes early were quick throws, so Atkins' bull-rush was neutralized. But when they weren't, Lang held his own against the two-time Pro Bowler, such as this second and ten throw with 8:36 remaining in the first quarter.

Even left guard Josh Sitton held his own against Atkins, on first down throw that gained 26 yards to open the third quarter. Rodgers had nearly seven seconds in the pocket before finding Randall Cobb over the middle, with Atkins' bull-rush neutralized without any accompanying moves.

We should point out that no one on the defensive line generated pressure during Rodgers' tea cup party in the backfield. During James Starks' eight-yard run with 12:46 remaining in the third, Sitton closed off Atkins' penetration single-handedly -- but it's possible that Atkins was responsible for an outside gap to defend the cut-back.

Atkins did have some penetration on Rodgers' third down throw to Jermichael Finley that led to an incomplete pass in the first quarter, but had George Iloka not leveled the tight end, Atkins' overall pass rush didn't influence the play.

However, there's no doubt that more attention is being given to Atkins than most defensive tackles-- which is predictable. With 4:42 remaining in the first quarter, Atkins attacked the B gap but three offensive linemen were in protection mode against Michael Johnson and Atkins.

Or beating on him at the point of attack with a double-team, like Starks three-yard gain with :38 seconds remaining in the first quarter. 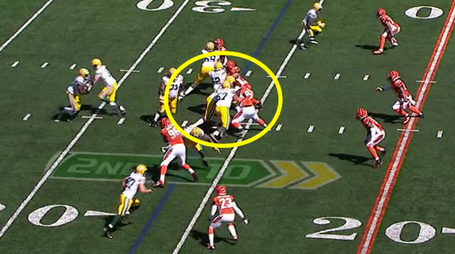 Or the pass protection with 7:41 remaining in the second quarter with three offensive linemen assigned to Atkins and Wallace Gilberry.

Or the power run on second and goal from the Bengals five-yard line with 7:33 remaining in the second.

Or the pass protection on first down with 13:18 remaining in the third quarter. 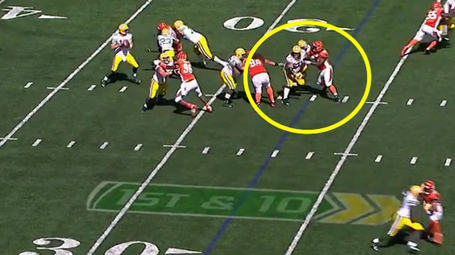 And that's when they weren't running away from Atkins, which accounted for a majority of Green Bay's designed runs.

It's early in the season and it's not the first time that Atkins has struggled in a game -- through Pro Football Focus graded Atkins' performance against the Packers as the worst in his career. It's clear that he's having a slow start based on his standards. Should we worry? Probably not after the third game of the year. But this will be given greater attention as the season unwinds.