Wondering if you'll get Sunday's game between the Patriots and Bengals? We have your answer.

There's interest in the Cincinnati Bengals and New England Patriots this weekend; two teams expected to compete for seeding in regards to the 2013 NFL playoffs (obviously they have to make it, yada, yada). Such an interest that a majority of the county, save for the midwest, will get Sunday's game, which will be called by Greg Gumbel and Dan Dierdorf on CBS. 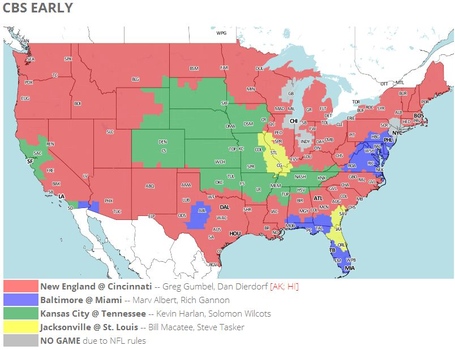 The CBS late game on Sunday will feature the Denver Broncos at the Dallas Cowboys throughout most of the country, save for the Arizona region. On FOX, those in the Cincinnati region will receive the Arizona Cardinals hosting the Carolina Panthers.