The Cincinnati Bengals will be seen by most of the country during their regular season finale against the Baltimore Ravens.

The regular season finale between the Cincinnati Bengals and Baltimore Ravens will be seen by a majority of the country, with both teams looking to win Sunday's game. The Bengals can secure the third seed with a win and improve to a second seed if the Buffalo Bills defeat the New England Patriots. The Ravens need a win with help to clinch the final postseason berth.

With that being the case, Bengals country, New England, most of the South and the Carolinas... and mostly everyone west of the Mississippi will have an opportunity to watch Sunday's game. 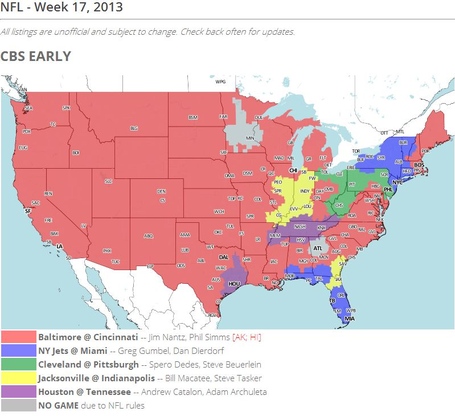 And when that game is over, many of us on the East Coast, Cincinnati (the region) and Indianapolis markets will get the Patriots and Bills.

The playoff implications are significant for virtually every AFC game on Sunday. The Dolphins have an opportunity for the final wild card spot with a win and help. The same goes for the Steelers against the Browns and the Patriots against the Bills, the Chargers against the Chiefs. Even the Broncos and Raiders could have an impact, because a Patriot win and a Broncos loss will give New England home-field advantage throughout the AFC playoffs.

The only two game that won't matter is the Tennessee Titans and Houston Texans (both eliminated) and the Denver Broncos at the Oakland Raiders (Broncos have locked the first seed and the Raiders are out).

Fox and CBS each has a double-header this weekend.