The Ravens and The Refs - Smack Talk Edition

If the Ravens lose to the Bengals on Sunday in the eyes of the ratbird fans it will not be because they were outplayed. It will be because the refs were biased.

Share All sharing options for: The Ravens and The Refs - Smack Talk Edition

In the past few weeks some of this talk has trickled into the comments here on CincyJungle. Let me be clear, I understand the refs sometimes blow calls, but as a whole the officiating crew is not biased towards one team or another. It seems petty when fans call out the refs and no teams fanbase does it more than the Ravens.

My wife got me an awesome shirt for Christmas: 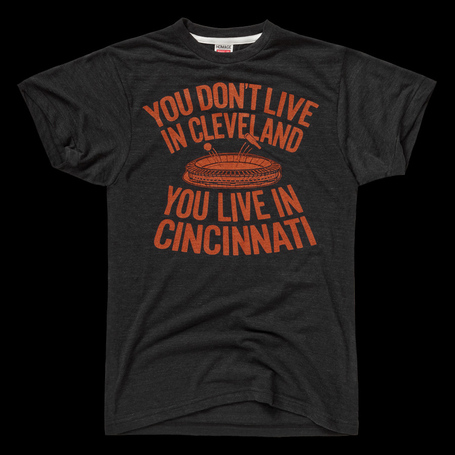 We all remember the thought behind the shirt. Cleveland fans throw stuff on the field, not Cincy fans. The same can be said for whining about the officiating. Let the purple people cry about refs, let the Bengals win the game.

A few weeks ago when Adrian Peterson played in Baltimore he commented that:

"They've got the worst fans in the NFL, throwing snowballs the entire fourth quarter, like kids. It was a bad feeling, a bad feeling."

So the former Browns fans followed in their storied history of being classless...

But, this post is about the refs and the way Baltimore fans cry when they lose. Let's find some examples.

"The NFL plays favorites. It's as simple as that. So many penalty and challenge calls are subjective enough that the officiating crew can literally win or lose almost any given game. The Pats and Steelers are the largest beneficiaries of this charade, as the league will do whatever it takes to give these teams the chance to win big games. The Ravens, conversely, are not one of the NFL's darlings. In fact, the Ravens have gotten enough objectionable calls and ex-awful-coach-turned-awful-color-commentator Brian Billick made enough noise about said calls that a vicious cycle exists in regards to officiating in Ravens games."

I bit my tongue last week, but Sunday was another atrocious example of anti-purple officiating. The game book will tell you that the zebras threw 10 flags on the Ravens, and 7 on the Bengals. A bit lopsided, but even more so if you look closer. Three of the 7 on Cincy were delay of game calls - not like they had much choice there (shut up, Titans fans). There were also 2 false starts, 1 hold, and 1 offside called on the Bengals. So basically, ONE call that involved any interpretation on the refs' part (the hold). Unlike the Ravens, who saw such calls as illegal contact (2), defensive illegal formation, chop block, unnecessary roughness, and pass interference. Pretty much every subjective call that can be made. Oh, and of course there was the whole "taking 5 yards away from you for almost fumbling" on Mark Clayton when Marvin Lewis threw the challenge flag. I also feel compelled to point out that, in the decisive final quarter, the penalty tally was Baltimore 5, Cincinnati 0.

Teams that refs hate are as follows: Ravens (I understand that they have a lot of black players, but why do refs feel the need to screw this team any time they play the Steelers, Packers, Patriots, or any team that has a lot of overweight fans)

Baltimore fans almost lost their mind when this happened: 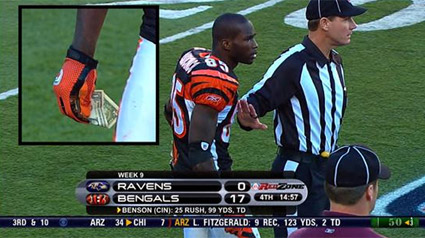 So Bengals fans, forget about the officiating. Every time there is a flag thrown against the Ravens, know that fans in purple all over are losing their minds thinking the world is out to get them.