Bengals defensive end Margus Hunt hasn't had many highlights this year as a situational pass rusher, but Mike Zimmer is feeling encouraged by his growth.

When the Cincinnati Bengals originally drafted defensive end Margus Hunt in the second round, he was considered a development project. Injuries on the defensive line has allowed him to have more snaps than originally projected. Robert Geathers was lost early in the season, allowing Hunt to rotate in. Then the Bengals lost Geno Atkins and Devon Still, allowing Hunt to work as an interior pass rusher at defensive tackle.

For the season, Hunt has accumulated 165 defensive snaps with 132 passes rushes but only 11 hurries and a shared sack against the Baltimore Ravens. The situation is second and nine with 1:07 remaining in the second quarter. Hunt settles into a three-technique as the right defensive tackle. It's an X-stunt, with Wallace Gilberry (at left defensive tackle) taking an inside move and Margus Hunt looping around. 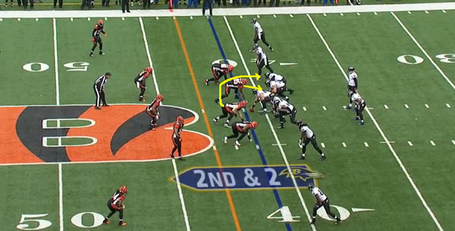 Michael Johnson blew by left tackle Eugene Monroe and made first contact, just prior to Hunt burying a shoulder into quarterback Joe Flacco. 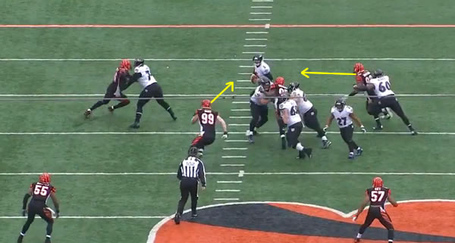 Flacco threw an incomplete pass on third down, forcing the Ravens to punt. Andy Dalton took a knee to end the first half.

Bengals defensive coordinator Mike Zimmer is encouraged with the way that Hunt is finishing plays.

"He's starting to finish a little bit more," Zimmer said via ESPN. "He understands that once he gets to the blocker and gets to a certain point that now it's time to get off and go to the quarterback or the runner."

Hunt played 22 snaps against the Ravens, generating two pressures, a hit and a shared sack. Zimmer called it his best game to date.

"This is probably the best game he's played," Zimmer said via ESPN. "He did a nice job in the game with some of the pass-rush stuff. We might have to get him in there a little bit more."