Do you have access to Sunday's game between the Bengals and Titans? Sure many of you will but there are some unusual areas receiving this game also.

Since the Cincinnati Bengals reached their 85 percent threshold on Thursday, we can move on with our weekly television coverage post. Cincinnati's game against the Tennessee Titans will be shown live on CBS in the southwest Ohio (most of Ohio will have Baltimore and Cleveland). There's a straight shot through Tennessee and the Titans market, as well as parts of Washington, Oregon and Idaho. 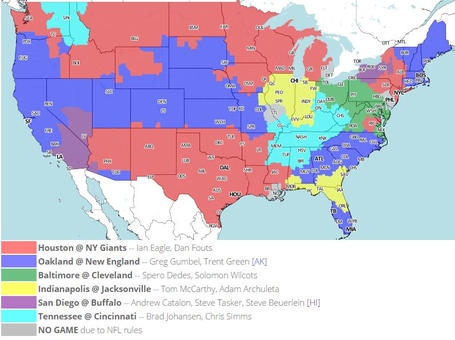 As for Cincinnati, we'll have the Bengals and Titans as our lone early game (CBS). After that game concludes, Cincinnati will have Denver at Seattle on CBS and San Francisco at Arizona on Fox.

Do you have Sunday's game between the Bengals and Titans?