Cincinnati Bengals defensive coordinator Paul Guenther told reporters this weekend that linebacker Rey Maualuga, who has been on the team's Non-Football Injury list since July 30, will be back "shortly". According to Bengals.com, the veteran linebacker is rehabilitating from a hamstring injury, the same injury forcing him to miss three regular season games last season, as well as parts of the wild card game against the Colts in January.

Maualuga has missed all eight practices thus far, spending the entirety of training camp with trainers on the side field. Because he was placed on the Non-Football Injury list, it might be logical (though uninformed) to conclude that a hamstring injury was suffered while training between spring practices and late July, when the team announced their injury lists.

The prospects of having Maualuga and Vontaze Burfict back has Guenther as excited as a schoolgirl seeing a pony during Christmas morning. "When we get all those guys up and running and we just do what we're supposed to do, we'll be hard to beat," Guenther said via Bengals.com.

It's funny how these things usually play out.

Selected in the second round of the 2009 NFL draft, Maualuga was obsessively viewed as the next great linebacker. Dhani Jones, a stabilizing force during the tremulous 2007 season with linebackers dropping like flies with broken wings, remained as the team's starting middle linebacker - a coach on the field, as he was often referred as. Maualuga was relegated to competition with former Canadian Football League standout Rashad Jeanty; Maualuga eventually won the starting job during his rookie season; it wasn't entirely surprising.

Despite two strong seasons as the team's starting strong-side backer, Maualuga was destined for more; specifically, he was going to be a great middle linebacker. When he replaced Jones at the starting middle linebacker, results were mixed while most of us, who unrealistically generate unapproachable expectations anyway, weren't impressed. He was serviceable as a run stopper but viewed as a liability in coverage; no more was that evident than the wild card game in 2011 and 2012.

Let's review the 2012 playoff game against Houston. From the Texans seven-yard line with 11:31 remaining in the first quarter, Houston offered a double-tight formation with Kevin Walter and Andre Johnson wide left. Tight end Owen Daniels was on the outside shoulder of the left tackle, with linebacker Rey Maualuga assigned in coverage.

It's a simple crossing route, which killed the Bengals (not just Maualuga) that afternoon (and all season). Maualuga, unsure which direction Daniels was taking, was already in a compromised position, feeling the weight of his feet rooted into the ground. Daniels went right. 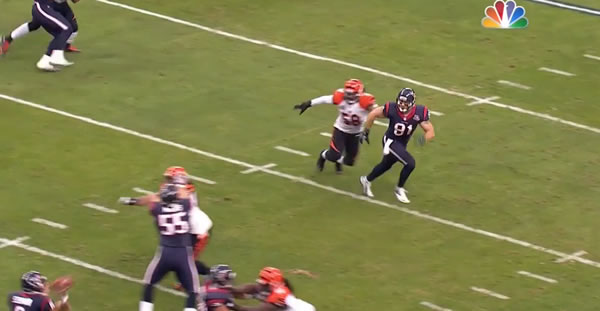 More than enough separation for an NFL quarterback and tight end.

With seven minutes remaining in the second quarter, the Texans were on their own 41-yard line on second-and-nine. Garrett Graham ran a crossing pattern, flashing across Maualuga's front. 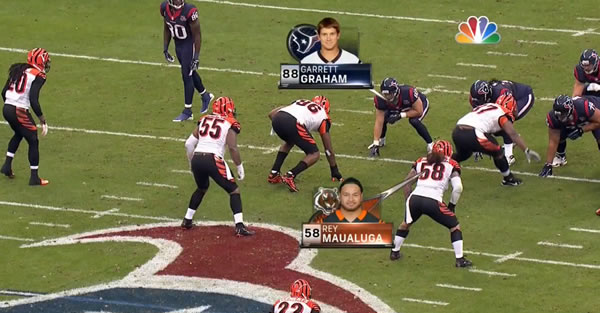 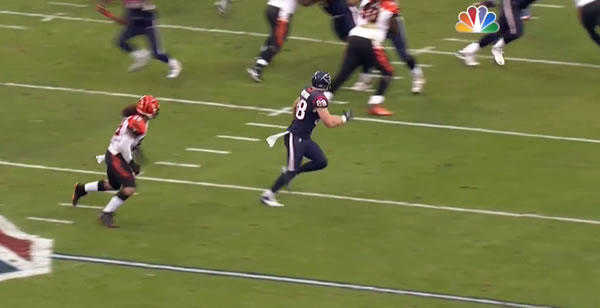 After a while, the Bengals simply stopped trying to cover Daniels with a linebacker, lining up Nate Clements (as a safety for the injured Chris Crocker) over the tight end.

Eventually these issues disappeared for one simple reason: they stopped playing him as an every-down backer in 2013. Vontaze Burfict and Emmanuel Lamur, both of whom had impressive though vastly different attributes, joined the team as undrafted free agents in 2012. Cincinnati shifted Maualuga's role as a two-down backer, mostly against the run while Burfict and Lamur (and Taylor Mays, among others), theoretically, took care of the team's nickel packages - roughly 50 percent of the defensive formation during the last two seasons.

Eventually his career, at least viewed from the lens of a fan, has come full circle. Once praised as greatness-yet-realized, Maualuga became the focal point of disappointment. Now he's once again viewed as a fan favorite, sans the overwhelming expectations from earlier in his career.