The Cincinnati Bengals head to Chicago to kickoff the regular season. Will you be able to watch it?

Share All sharing options for: Bengals at Bears TV Coverage

Most of the entire United States will have the honor of watching the Cincinnati Bengals open their regular season on television, when CBS airs the 1 p.m. kickoff this Sunday. Well, geographically at least. Not so much the major metropolitan areas down the east coast. Well, it's pretty much west of the Mississippi, save for a few segments stuck with the Chiefs and Jaguars and the Raiders at Indianapolis.

Other than that, it's mostly dominated by Bengals and Bears. Courtesy of The506.com, here's the television map. 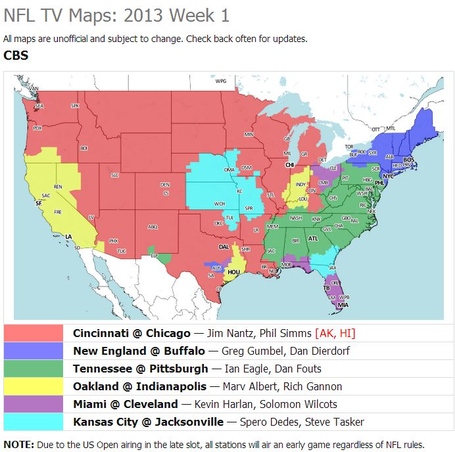 If you're in Cincinnati, you'll obviously get the Bengals on CBS. There will be no late CBS game. On Fox, those of us in Cincinnati will get the Minnesota Vikings at Detroit Lions (early game) and then the Green Bay Packers at San Francisco 49ers during the late afternoon game.