Bengals vs. Dolphins: Should have Mike Nugent attempted game-winner field goal in overtime?

We take a look at the Bengals decision-making process towards the end of the game.

Share All sharing options for: Bengals vs. Dolphins: Should have Mike Nugent attempted game-winner field goal in overtime?

There's 10:25 remaining in overtime and the Bengals have a fourth down decision to make at the 37-yard line. Too close for any substantial gains for a punt, do the Bengals try to convert for a first down or invite Mike Nugent to make a booming field goal to win the game? On the other hand, overtime in the NFL is all about field position. It's the conservative move and relying on Cincinnati's defense usually makes it the correct move. So the Bengals decided to punt the football and Kevin Huber drops a sand wedge inside the 20-yard line, relying on a defense that's stood tall when the game has mattered the most.

Cincinnati's defense forced the opposing offense to punt the football back, where the offense had an opportunity to move down the field and convert the game-winning field goal.

This wasn't how the game played out in Miami. That was how the Bengals beat the Buffalo Bills in week six.

Miami is forced to punt after going three-and-out. Cincinnati's offense moved the football 36 yards to Miami's 39-yard line with 9:12 remaining in overtime. Almost identical to the scenario against the Bills, the Bengals have a decision to make. Do you punt the football, attempt a fourth down conversion, or have Mike Nugent attempt a career-long 57-yard field goal after hitting a 59-yarder during pregame warm ups?

"If I miss, they only have to go 15 yards for a field goal," Nugent said. "As much as I wanted to be out there it was probably the right decision."

Mike Nugent, who kicked a career-high 55-yarder last year, crushed a 54-yarder earlier in the game to give Cincinnati a 20-17 lead late in the fourth quarter. The conversion gave Nugent a career-high three field goals of 50 yards or more in a single-season.

Though one could complain about the decision-making process that led to Cincinnati's eventual loss, one must remember that it wasn't the decision to punt that gave Miami superior field position. On the first play after Huber's punt, Mike Zimmer sent a massive blitz at quarterback Ryan Tannehill. No one got pressure, which allowed the quarterback to step into his throw. 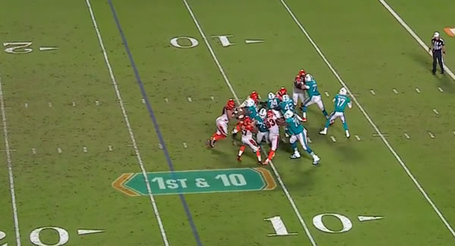 Cincinnati's defense had man-coverage across the field, with Terence Newman covering Mike Wallace's go-route. He was beaten. Instead of watching Wallace haul in the football for a possible touchdown, Newman just tackled the receiver, drawing a defensive pass interference with a "live another play" mentality.

"I figure to put the ball right there and we get another chance to make some plays," Newman said via Bengals.com. "Because we played so hard all day. You couldn't have it end like that."

After James Harrison helped to stuff running back Daniel Thomas for a one-yard loss on Cincinnati's 40-yard line, the Dolphins were forced to punt. Consecutive incomplete passes led to an eventual quarterback sack and safety, giving Miami the 22-20 win.

It's easy to apply hindsight philosophy when the strategy had worked before. Admittedly, there are differences between the win against the Bills and the loss to the Dolphins. Buffalo's ensuing punt was shanked and Cincinnati's offense only moved eight yards for Nugent's eventual game-winner. Miami pinned Cincinnati on their own eight-yard line. Additionally, the defense didn't have cornerback Leon Hall and defensive tackle Geno Atkins against Miami, whereas they were available against the Bills.

Should have Mike Nugent attempted the 57-yarder? Looking back hours after the game has concluded, sure. Why not. They lost, every decision they made was wrong, right? Had Nugent failed to convert, Miami needs only a handful of yards after taking over near midfield. Was it the decision to have Huber punt that directly caused Cincinnati to lose? No.

Yet, it would have been a better way of losing the game instead of watching Andy Dalton take the quarterback sack for a safety. But those are the breaks; you win some, you lose some.