Steelers vs. Bengals: How attitudes have changed in ten years

We take a look at how the attitude between the Bengals and Steelers fan bases has changed in the past ten years.

Share All sharing options for: Steelers vs. Bengals: How attitudes have changed in ten years

You'd think that Neal Coolong (who manages the Pittsburgh Steelers site Behind the Steel Curtain) and I would lob mini-bombs at each other when the Bengals and Steelers meet twice every year. It's a reasonable conclusion, being as we're site managers for two sites that support teams and fans that can't stand each other -- (rubbing hands together maliciously) They're never see the virus embedded in my most recent email. Maybe that's what's expected of us, but in reality there's few people that I respect or enjoy reading more than Neal and the crew at Behind the Steel Curtain.

The general belief that fans of the Bengals and Steelers have intense hatred for each other is mostly a fiction, derived from specific people from both bases that generally just hate another team. There was a time when Cincinnati began rising throughout the past decade that gave prominence to Bengals fans demanding a place at the table that caused some friction, but for the most part that dissolved.

In fact, the series may have taken an unexpected turn into a general feeling of respect between both teams. I asked Neal over the weekend why he thinks that is.

"I think the Bengals are a very likable team," Coolong says. "Because of that, and the fact the Steelers have defeated Cincinnati more often than not in recent years, I think Steelers fans generally translate that onto a reasonable feeling of respect for the team as well as the fans. Obviously that will change immediately before and for a bit following the game, but let's look at last year. The Steelers' final two games of the season were against Cincinnati and Cleveland. The Bengals game was a vicious, violent and intense defensive struggle. Leon Hall makes a great read on a Roethlisberger pass, the Steelers got a deep touchdown from Antonio Brown. That's pretty much the only offense for 3.5 quarters. Cincy gets a late pick on Ben, a man-play by A.J. Green, a huge game-winning field goal, our season's over.

"A great defensive football game. Can't hate on Cincinnati for that.

"The following week against the Browns, it's sloppy, ugly and combative. Fights are breaking out, but the Steelers are clearly the better team, and they win. Certain other sites throw what can only be described as a hissy fit, incorrectly labeling several plays to be dirty (and calling certain players "thugs," which is a term I find to be completely inappropriately labeled on a football player for actions inside the lines. A thug steals purses and cars and holds guns to people's heads. He doesn't play football) and essentially asking for the immediate execution of most of the Steelers team. It's very hard to have any respect for those kinds of fans. You know, morons."

If you look at the comments in our post-game reactions last year, Bengals fans generally wallowed with a martyrs attitude following Cincinnati's 24-17 loss. Not much was said about the Steelers with Bengals fans pointing their overall irritation at the Bengals and the team's coaching staff -- the usual drumbeat of losses in Cincinnati. Even I was feeling sorry for myself after the game, writing "apparently the Bengals had a gameplan, and that game plan called for a hint of nasty with a delayed twist of ineffectiveness."

Then, following Cincinnati's win over the Steelers to clinch a postseason berth, we celebrated like it was the greatest victory in 20 years; not because we just made the postseason in consecutive years, rather it was against one of our greatest rivals. Steelers fans stopped by for congratulations. In fact, if you read most of the comments that feature Steelers and Bengals fans and filter out some of the needless insults from the usual suspects, most of it has become respectful aimed at total discourse about the game of football and where our individual teams are. 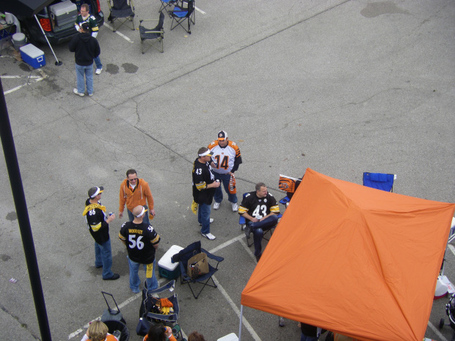 "If you lost that game, it seems more likely Bengals fans would be willing to be admit the Steelers put up a great defensive effort," writes Coolong. "You wouldn't bitch and complain about how much you hate the Steelers and act like a child who just got put in time out."

In fact, there's an irony at work here. While Bengals and Steelers have their history, there's a common theme that both fanbases have gravitated to; antagonism with other teams within the division, like fans that support the Cleveland Browns and Baltimore Ravens. Does that suggest total respect? No. And there will always be trash-talking (just wait until later today). Insults will be lobbed until the end of time, from the Stoolers or Squealers, or some combination of an insulting Roethlisberger name, to the Bungles in Cincinnati. That's just in our nature. We're fans of opposing teams.

Admittedly, that's my personal perspective. Reading other sites outside of the SB Nation sphere, the comments often become childish. Most comments at the Cincinnati Enquirer or even ESPN tend to take a negative turn, mostly with pot shots against the writers or pointless five-worded sentences about how upset they are. Commentors at Cincy Jungle and Behind The Steel Curtain are generally insightful.

One comment from a Bengals fan at Behind the Steel Curtain called for divisional unification.

I’m a life long Bengals fan and this thread is showing respect for both teams. We have always been like the younger brother trying to overcome the greatness of an older sibling. I have enjoyed this game against the Steelers since 1970 when the merger was established. Some of the old timers might remember when the AFC Central was set we were nicknamed the powder puff division. Man was that not the case, the Oilers with The Tyler Rose, Browns and the Cardiac Kids, Bengals with Kenny Anderson, and the Steelers with the team of a generation, God that was fun. Everyone played defense everyone had stars. I want that. I love that, I really root for all teams to be strong in our division that’s part of what makes a season great. That being said I hated the injuries you have just gone through, I want you at your strongest when we play. So lets the season play out and remember as a division we are like family, we fight among ourselves but will kill anyone outside who disrespects us.

I don't see us going that far, but it goes to show how things have changed in the past ten years.